On May 16 of this year my daughter Bri graduated from UC Berkeley. This is one of those "proud mama" posts so if that's not your thing I won't be offended if you choose this time to excuse yourself and leave.
Here she is all capped and gowned before the ceremony. 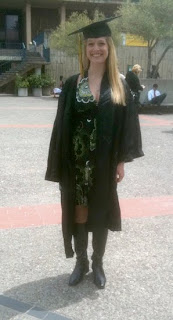 There were so many people who wanted to come that they had to move the ceremony from the Greek Theater where it's normally held to Haas Pavillion which holds 11,500. We took our seats and then noticed there were an AWFUL lot of seats reserved for the grads. 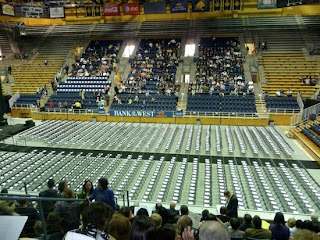 The stage was set. 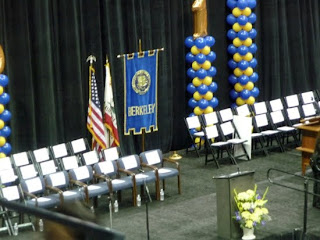 Finally they began to file in. "Hi Guys!" she beamed up at us. 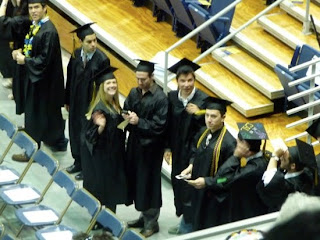 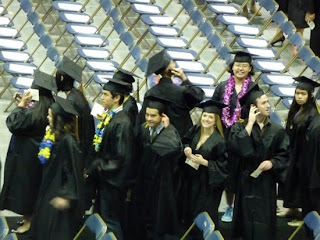 As the crowd filled in, the graduates names were called out one at a time as they streamed up the aisle to the stage. Bri's blond mane was always easy to spot. 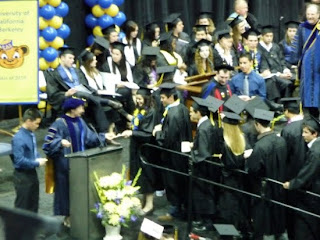 They called out names for over an hour and twenty minutes! Luckily there were diversions such as this group that planned ahead. They took up an entire row of seats and the tops of their caps spelled out "SO NOW WHAT?" Indeed! 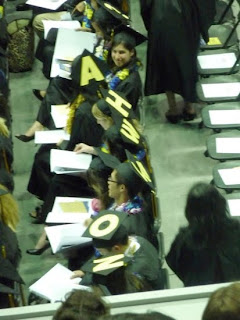 After the ceremony we went out to dinner. Here's Bri and her sister, Krissy outside the ceremony.

The following day there was a MUCH more intimate ceremony with the Theater Arts Department. But of course, THAT day I forgot to bring my camera. It was a warm and emotional weekend—a real ten hanky affair.
CONGRATULATIONS Brianna!!! We're soooooo PROUD of you!!
Posted by Tricia McWhorter at 7:55 PM