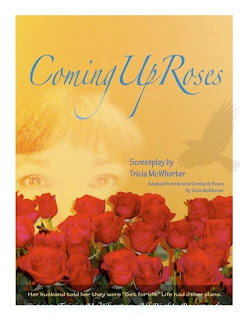 I have been MIA from my blog for quite awhile now but I'm back. A big, huge THANK YOU to all of you who stuck around. A few of you departed for livelier locations and I don't blame you a bit.
I have been busy working on my screenplay, Coming Up Roses, readying it for the big Pitch Fest at the Northern California Screenwriters and Filmmakers Expo in Napa, that took place the last weekend in March. I managed to finish it—a miracle in itself. In fact, I did fifteen re-writes and was pleased enough with it to screw up my courage and pitch it to HBO, Lifetime, A Band Apart, Silverheart Productions and Silver-Bitela. 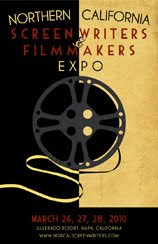 The Expo itself was quite an experience. I sat in on seminars with Bobby Moresco who received an Oscar for "Crash". He also wrote "Million Dollar Baby". I got to talk with him and his wife over wine and discovered not only is he talented, he's amazingly nice as well. I met James Dalessandro who wrote both the book and the screenplay, "1906", Howard Fine—a famous acting coach in Hollywood, as well as a lot of other very talented folks. It was heady and quite exhausting. I came away with my head stuffed full of ideas and the realization that I've only just stuck my toe in the water and this isn't a pond but a bloody huge ocean.
I'm not sure what's next. I've learned a lot about screenwriting. I think I know what I need to do to make my script even better. I'm at work on a number of other stories and I've also been hunting for a job along with about ninety million other people. The times they are indeed a changing out there, and the weather I've encountered hasn't been too sunny. But I'll keep on keepin' on. And I'll try to do a better job of checking in here.
Ciao for now!
Posted by Tricia McWhorter at 3:19 PM