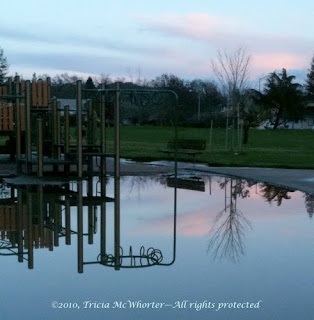 It's been a while since I've posted here. No excuses. I've been writing.
I've been working on a novel for some time now and, while it's not quite finished, before Christmas I began adapting it into a screenplay—my first. Last week I finished the first draft of "Coming Up Roses". Today I registered it with the Writers Guild of America. It's a good feeling to have finished it. Hell, who am I kidding? It feels GREAT to have actually completed it. This is like step one of three million but that's how journeys begin. There's always that first step.
To celebrate, to clear my head, and MOST importantly—to reward my patient dog who's gotten ignored by me a bit lately, she and I took a walk to our neighborhood park today. The rain had stopped for awhile and the sun was dipping behind the trees as we strolled around a rather soggy park. This photo is of the playground. No. It's not a playground on a lake. It just seems like that. This has been quite a series of storms we've been having. But for me, anyway, it feels like the clouds have parted and I can see a bit of blue sky.
Posted by Tricia McWhorter at 9:58 PM